Roman camps in our territory

Gradual discovering of traces of Roman military forces enables nowadays a relatively accurate apprehension of the spatial extent and intensity of Roman intervention, and of the strategy of commanders under Emperor Marcus Aurelius. Today we know some dozens of temporary field camps, which were discovered on the basis of colour differences and crop marks in cereals identified in aerial images or excavation photographs. Other indications of Roman military activities also are available (e.g. the still unverified segments of ditches, small military finds, etc.). 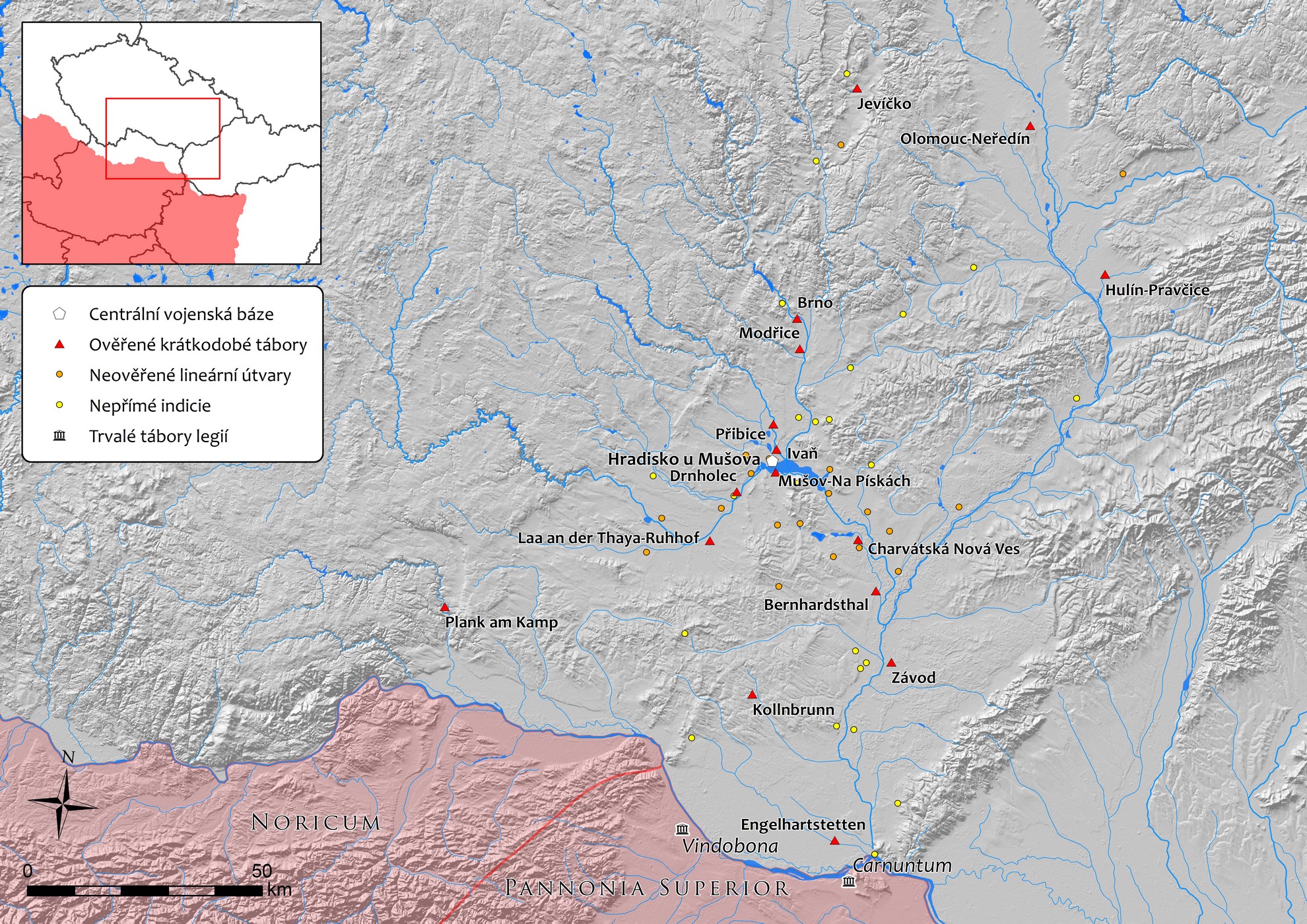 Temporary field camps, depending on their dimensions, accommodated larger or smaller military units. They were fortified by a ditch and an earthen rampart. It seems that their internal building structure consisted only of tents and temporary shelters. Many of these camps are surprisingly large, sized as much as 50 hectares, and they may have accommodated military troops comprising more than 10,000 men. Some others, on the other hand, are quite small – they were intended to accommodate minor tactical units or to serve as sheltered anchorages along the rivers Dyje and Jihlava. 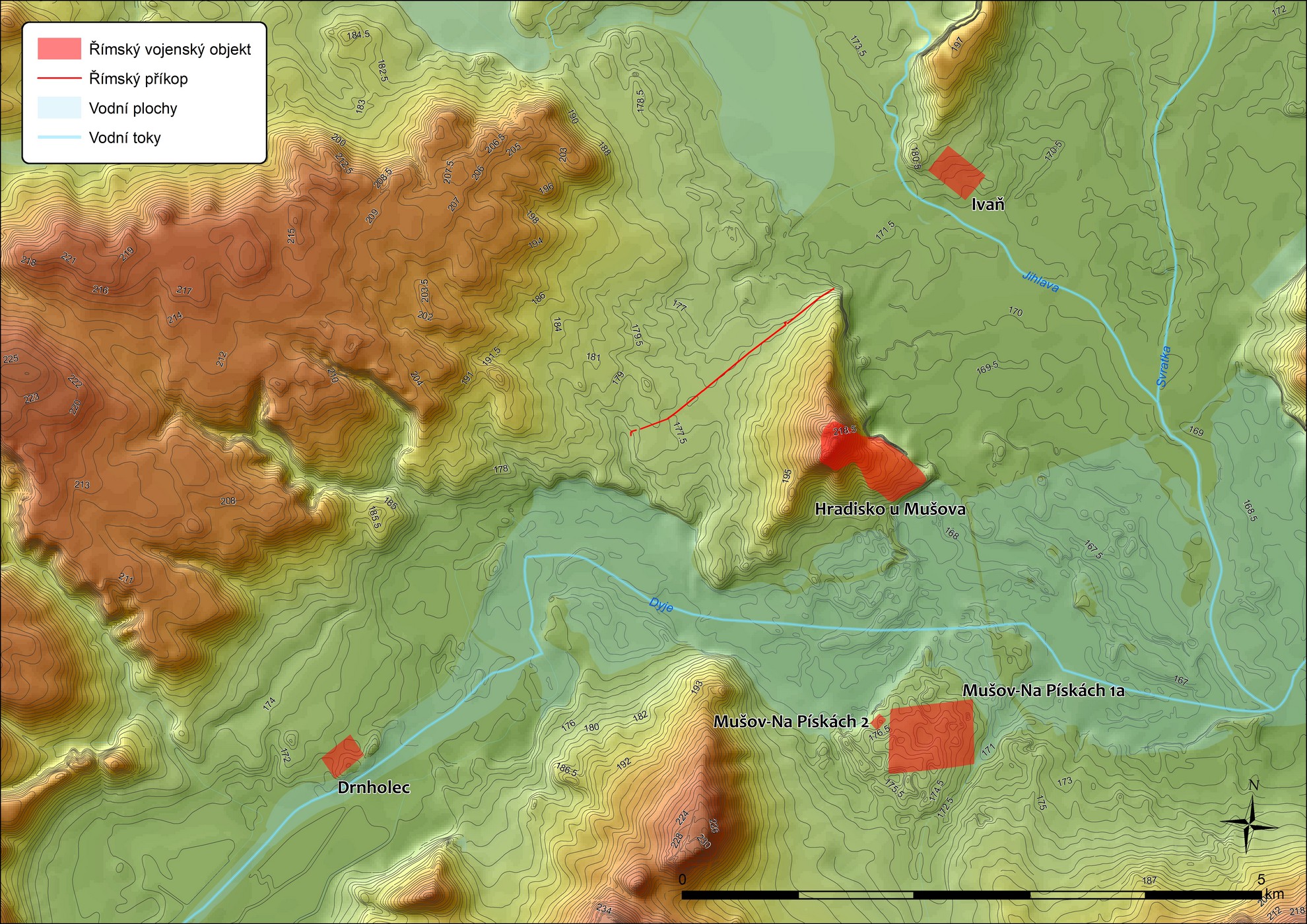 One of the main tasks of Roman military forces was to exercise control over indigenous population who was not always friendly towards the occupation army. Also important was the supervision of the main traffic routes, inclusive of fords and anchorage grounds, whose control was inevitable for a fast transfer of soldiers and supplies within the military operations. The rivers Morava and Dyje were probably used by the Romans to transport a huge volume of necessary supplies for soldiers and animals. 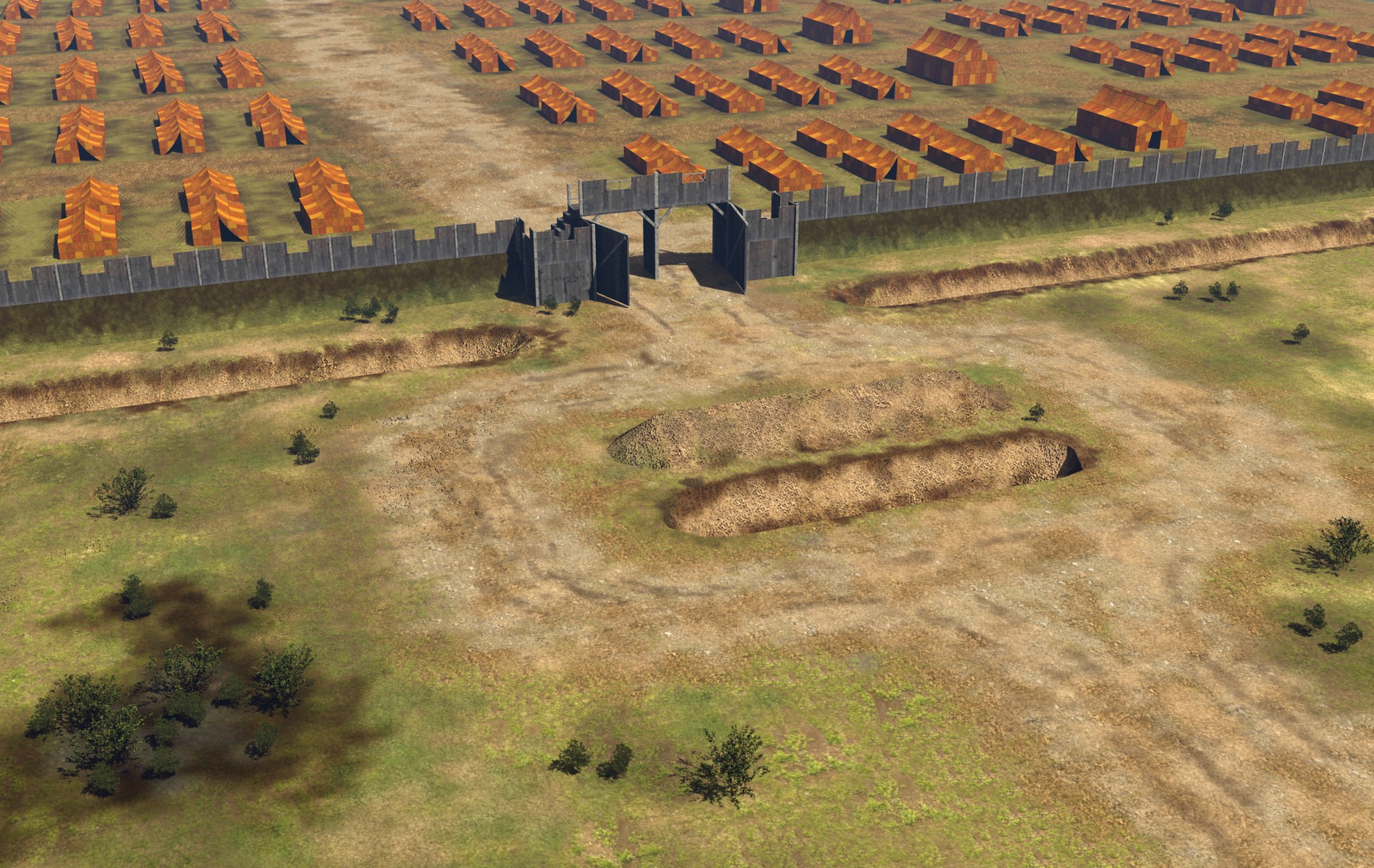 Visualization of a part of a Roman field camp

The largest concentration of temporary field camps in Moravia was detected in the neighbourhood of Hradisko near Mušov. The camps in locations like Mušov Na Pískách on the southern bank of Dyje or Ivaň on the eastern bank of Jihlava were probably intended for garrisons who controlled the access roads to the central fortress on the hill Hradisko. Spacious encampments, like those to the north of Přibice, may have temporarily accommodated a large contingent of legionaries at the beginning of a military campaign towards the north and northeast. Some of the camps were built by the Roman army in places with the highest concentration of Germanic settlements, such as the middle reaches of Dyje, the southern part of the Brno Basin or the lower reaches of Morava on the Austrian-Slovak border. Another camps – in Olomouc, Hulín-Pravčice or Jevíčko – were most probably intended for garrisons, who should have controlled the access roads, on which the Germans living in the Bohemian Basin or in Silesia travelled to the Moravian settlement area. 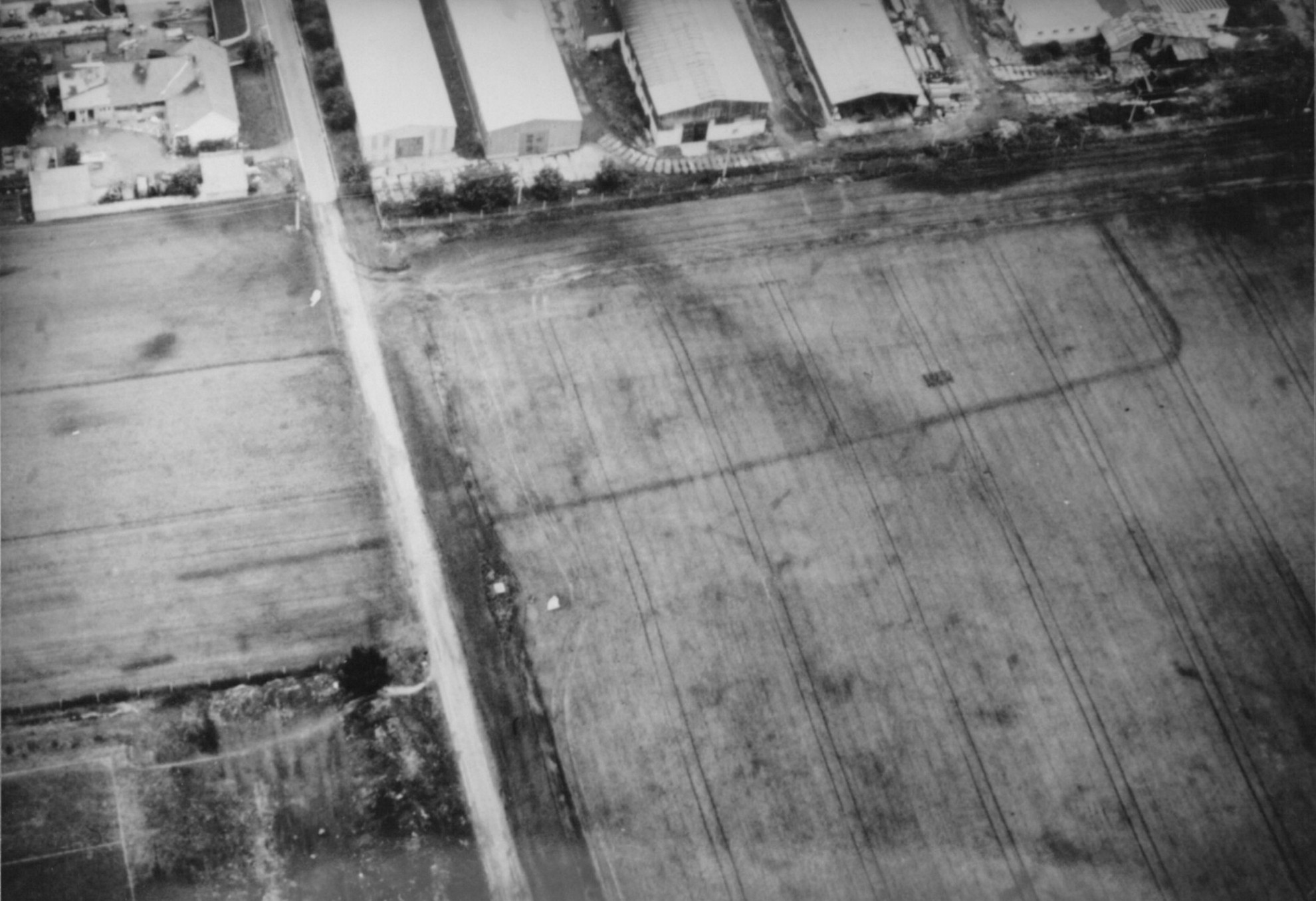 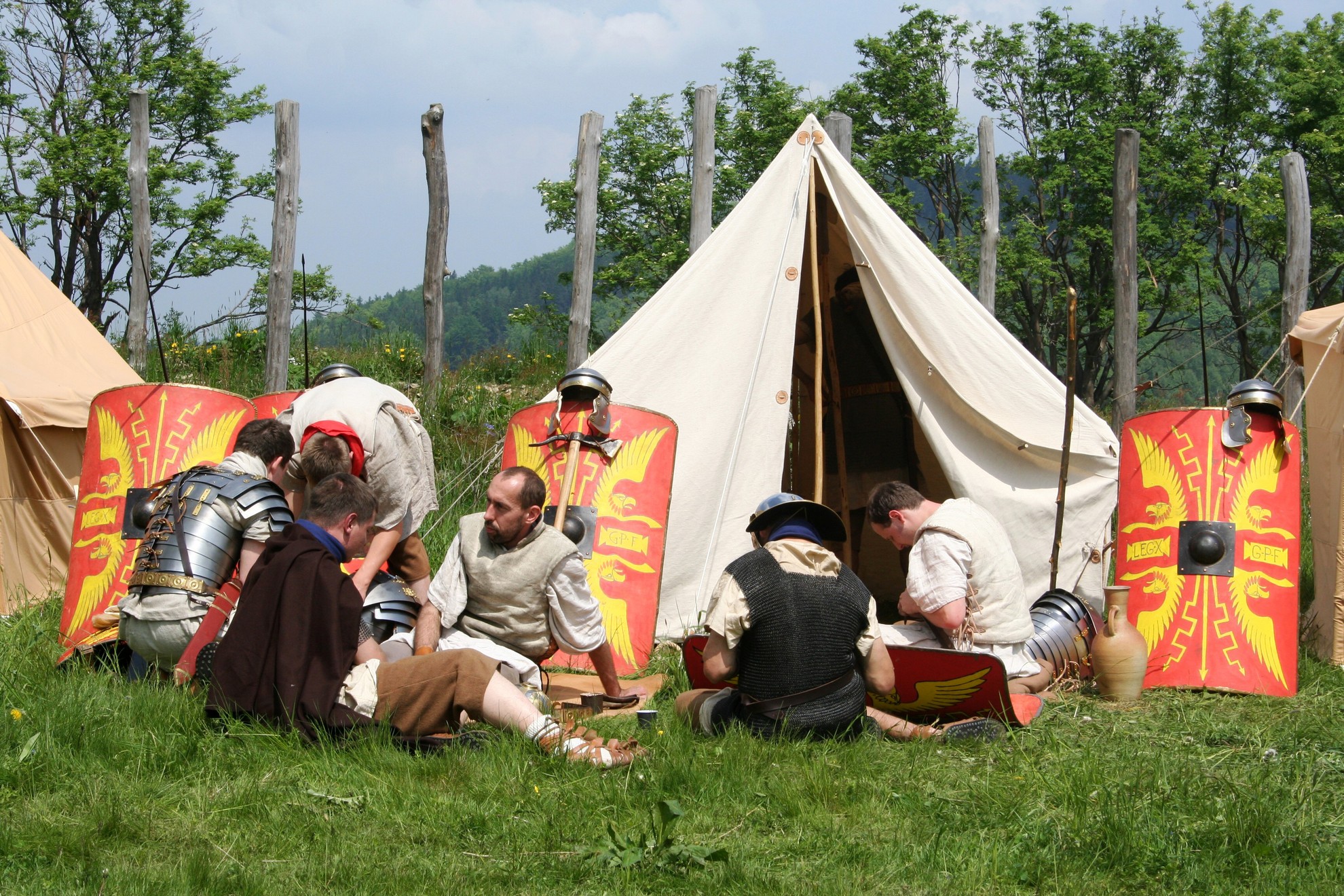 Legionnaires in front of the tent, today's reconstruction